Everything is Going To Be Okay 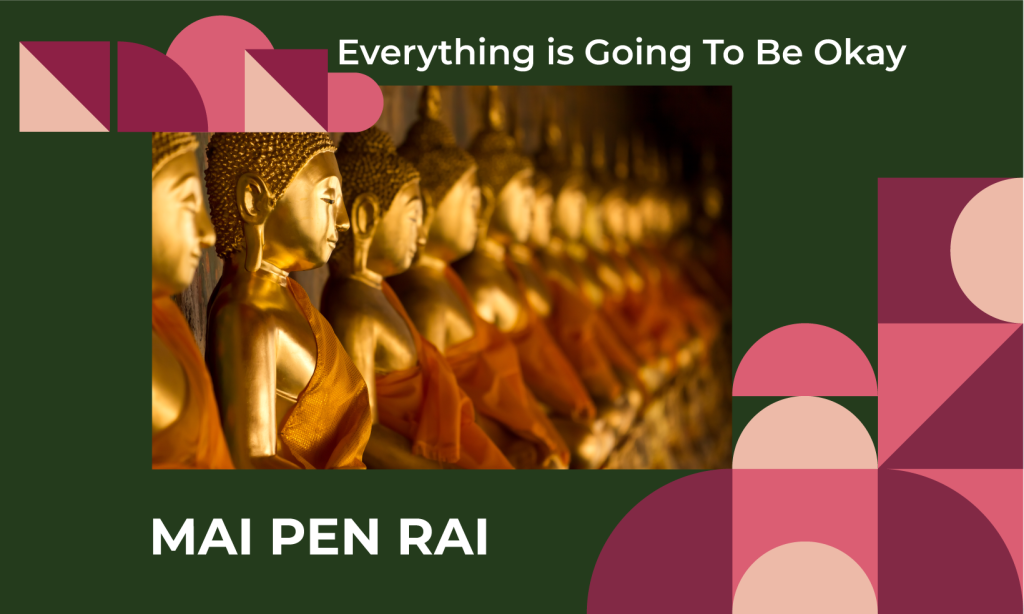 ไม่เป็นไร (Mai pen rai) is a common phrase in Thailand which means “everything is going to be okay” or “don’t worry”; often said when something goes wrong or out of plan. However, there is more to it than just a common saying; hence when you visit Thailand, you’ll often hear this phrase on the street. The phrase “Mai pen rai” reflects the true Thai culture and the Thai mentality of easygoing, resilient and forgiving.

Oftentimes many disputes easily end with just the phrase “Mai pen rai” which dissolves all the feelings of anger and disappointment. When said with a sincere and comforting tone, the phrase signals forgiveness with no hard feelings. We often use it as a reply when people apologize for small mistakes, such as stepping on your toe in a crammed bus or giving you a wrong change. With Thailand’s tropical climate, it’s very easy for people to get agitated by little things, but instead of taking a grudge on these things, it’s better to just forgive and move on.

“Mai pen rai” is also used as a friendly rejection to offers. For example, when asked if you’d like to upgrade the size of your food order or get additional condiments, people often decline with the phrase “Mai pen rai” instead of “Mai” (No). This is a more easygoing and friendly reply, as opposed to “Mai” (No) which sounds quite rude and disrespectful.

The phrase “Mai pen rai” underlies Thai people’s resilience. When things go out of plan, we often say “Mai pen rai” to comfort ourselves and people around us, and to signal that there will always be next time. This is why Thai people don’t give up easily and can cope in difficult circumstances with smiles.

Why not try the “Mai pen rai” attitude next time you face a problem?

Learn more about Thai culture and conveniently travel to Thailand from your doorstep with Heap Brand- Thai snack subscription box.