The City With the Longest Name 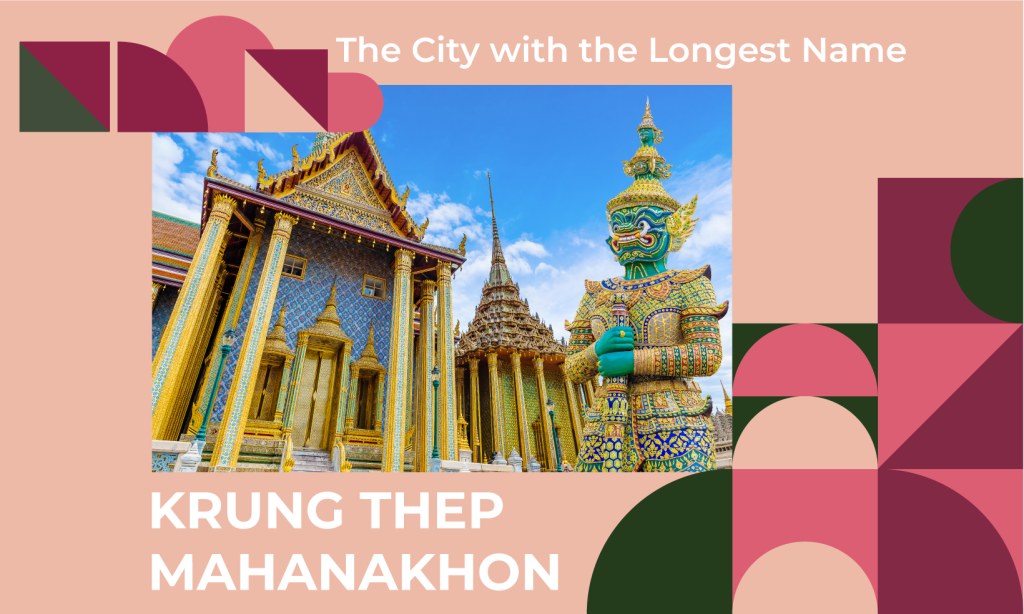 This auspicious city’s name was established by King Rama I (Phra Phutthayotfa Chulalok Maharaj), the first king of the Chakri dynasty since 1782. The name tells the story of the city and reflects how Thai culture is tightly linked with buddhism and hinduism.

The story goes…The capital city of Thailand is an enormous city, with a size similar to the city of angels in heaven, where the emerald buddha is situated. It is undefeatable and is the land of prosperity and stability. The beautiful palaces around the city are built by Indra and Vishnu deities for the angels from heaven that get reincarnated into the kings. The city is complete with abundant resources and charm.

So why is the capital city of Thailand known as “Bangkok” rather than its long name?

Since the Ayutthaya period (14th-18th Century), there were records of a small harbor town called “Bangkok” known to foreigners as the entrance to Thailand. The spelling of the city was established by the priests that came to Thailand to spread Christianity and wrote letters back home. As trades flourished, Bangkok became more popular as more merchants arrived in Thailand. However, to Thai people, the capital city was still Ayutthaya and Bangkok was just a small town.

If you’d like to try learning the name, maybe this song can help! https://www.youtube.com/watch?v=tK9y95DQhwM

Today, Bangkok is the world’s most-visited city, ranked by Mastercard for 4 consecutive years (2016-2019). The reason behind why the city is so popular among tourists is the unique balance of historical sites, delicious food, relaxation, nightlife and shopping centers. Bangkok offers everything you want in your travels and much more!